We at SMSEagle are happy to do our part in reducing environmental risks posed by waste electrical and electronic equipment and the ways of minimizing these hazards. More importantly, we find it paramount to set a good example so that others will do the same.

“We have not inherited the earth from our ancestors, we only borrowed it from our offspring. Let us care about it, together.”– Antoine Marie Roger de Saint-Exupéry.

In the Report – World Commission on Environment and Development (WCED) of 1987 it is written-…
“…balanced development is the development, where the needs of the present generation may be met without depraving future generations of the same choice.”

From that time on the balanced development has become the target in all areas of human activity. The idea of “corporate social responsibility” should be understood as such activities undertaken by entrepreneurs, which lead to a balanced development in particular sectors and branches of economy.

Although the “balanced development” has a much broader range of reference than economic activity, the sign “Nature Friendly Company” is the evidence that entrepreneurs and companies, which launch electric and electronic equipment into the Polish market, believe in values, which are a part of the vision of the balanced development. 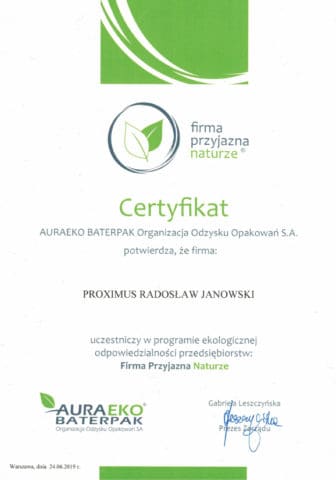 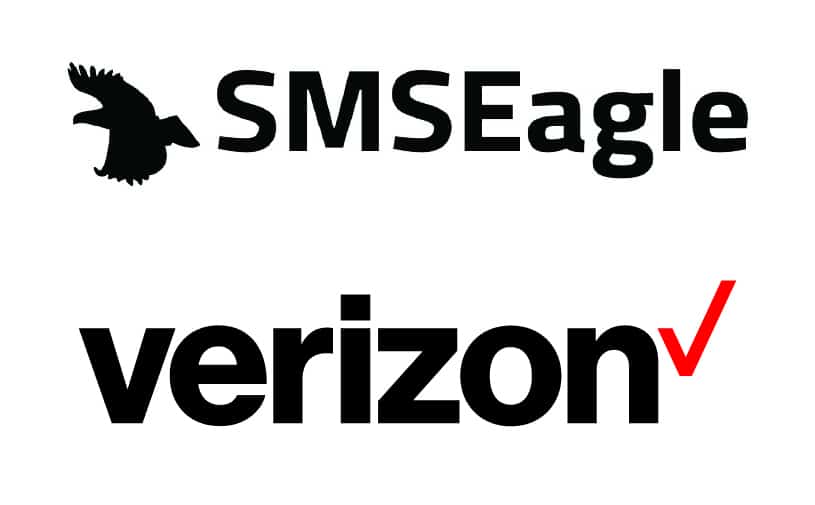 “Verizon Wireless is the second largest U.S. wireless communications service provider, that’s why it’s important that SMSEagle users can take advantage of their offer to get the coverage they need,” says Radosław Janowski, CEO of SMSEagle.

SMSEagle is a professional hardware SMS gateway for sending and receiving SMS messages. The device is designed with focus on reliability and stability. It has a Linux on-board, modern responsive web-interface, database backend, and built-in GSM/3G/4G modem. SMS messages are sent/received directly to/from cellular network without using any external 3rd party solutions. SMSEagle has a built-in SQL database for secure storage of messages. Built-in SNMP agent allows to constantly monitor performance of the SMSEagle. The device has a range of built-in plugins that enable additional functionalities and easy to use HTTP API for integration with external applications. 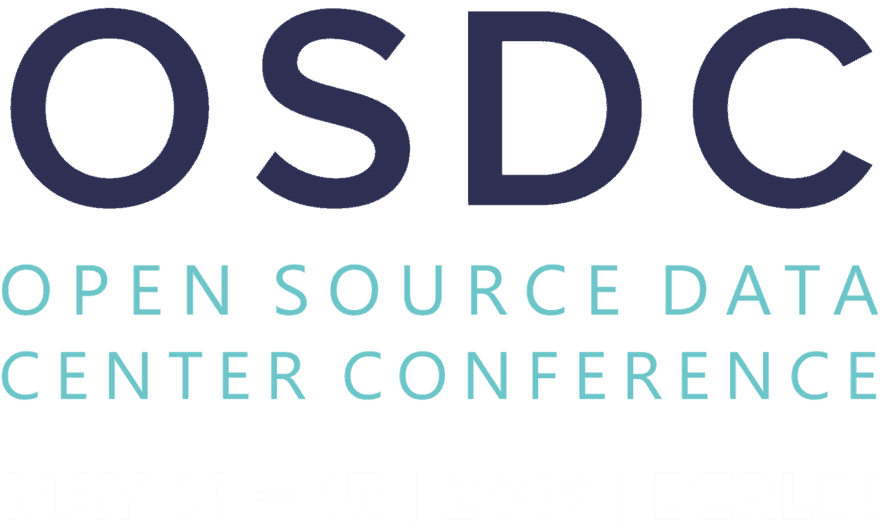 We are happy to announce that SMSEagle is a proud sponsor of Open Source Data Center Conference (OSDC) 2019! The OSDC takes place May 14 – 15, 2019 in Berlin.

The Open Source Data Center Conference 2019 focuses on innovative strategies, forward-thinking developments and new perspectives in dealing with complex data centers. This year’s agenda includes some of the most important representatives of the international Open Source scene.

The program includes inspiring speakers and interesting topics such as:

The whole program is available at osdc.de/agenda.

The aim of the event is to present state-of-the-art solutions and pioneering concepts for developers, decision-makers, administrators and IT managers who work with complex IT infrastructures. OSDC attracts more than 150 open source enthusiasts to Berlin every year. Speakers and participants take the opportunity to inform themselves about the latest developments and jointly launch new IT projects. An evening event offers the ideal setting for informal exchange. 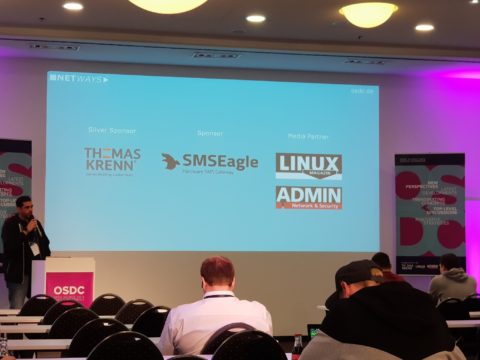 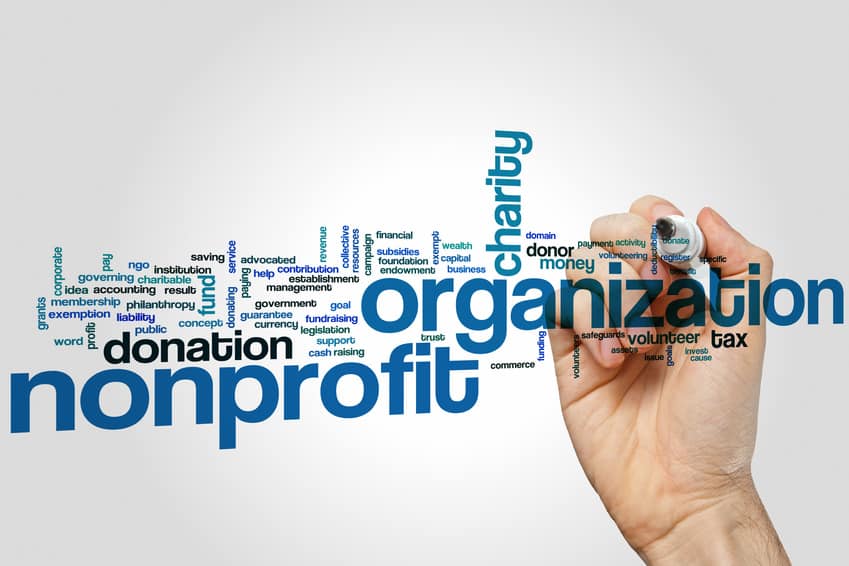 There are heroes who make Real Work happen while battling to eradicate hunger and poverty, helping children finish school, rescuing animals, preserving jungles. Or maybe they are educating and preparing new generations for achievements that will change the world?

Nonprofit Discount
SMSEagle offers a 10% discount to nonprofits and charities that we verify. 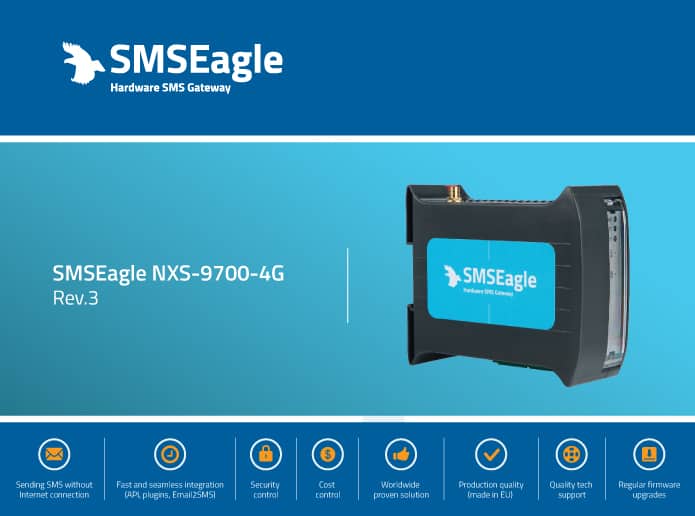 SMSEagle, a leading provider of hardware SMS gateways, today announced a new suite of hardware, the NXS-9700-4G and the NXS 9750-4G which provide compatibility with almost any 4G/3G network in the world.

The new 4G series of SMSEagle NXS-97xx devices meets the requirements of a transition from 3G to 4G that happens in advanced telecom markets. It answers upcoming 3G network shutdowns in Australia and the U.S. in the following years, and what is more, can also provide access to LTE-only operators like Verizon and Sprint in the U.S.

NXS-97xx-4G is EU-originated product, for automatic sending & receiving of SMS messages. SMS messages are sent directly to the 4G network. This shortens the critical path in comparison to online SMS services, allows connectivity even during an Internet failure and provides confidentiality and privacy of information. Depending on the version, it can be equipped with one or two internal 4G modems with 3G-fallback.

NXS-97xx-4G comes standard with several features that support a flexible, reliable  environment for IT professionals:

“Our new products are equipped with all the strength and performance efficiency to support everyday operations,” SMSEagle Product Manager Radosław Janowski said. “Their extensive network compatibility and modem flexibility establishes the NXS-9700/NXS-9750 as the go-to hardware SMS gateway solution for IT professionals, worldwide.”

SMSEagle is a leading brand of SMS gateway hardware worldwide. The product allows you to send SMS alerts coming from network monitoring systems, SMS tokens from authentication systems, convert email to SMS messages, send and receive SMS texts using API. The gateway is designed for professionals who rely on reliability and easy integration with existing IT systems 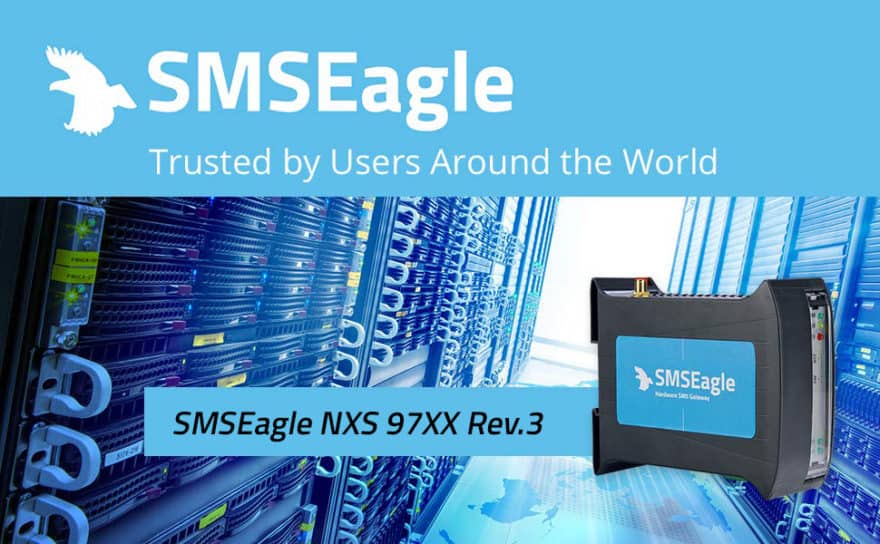 The Revision 3 has minor modifications in hardware that meets demands of highest standards in networking devices. It is unmatched in quality and we believe it will cope with all the challenges faced by demanding customers.

“We strive to provide our customers with products and services that meet and even exceed their expectations. We are committed to continuous improvement.” says SMSEagle Product Manager Radosław Janowski. 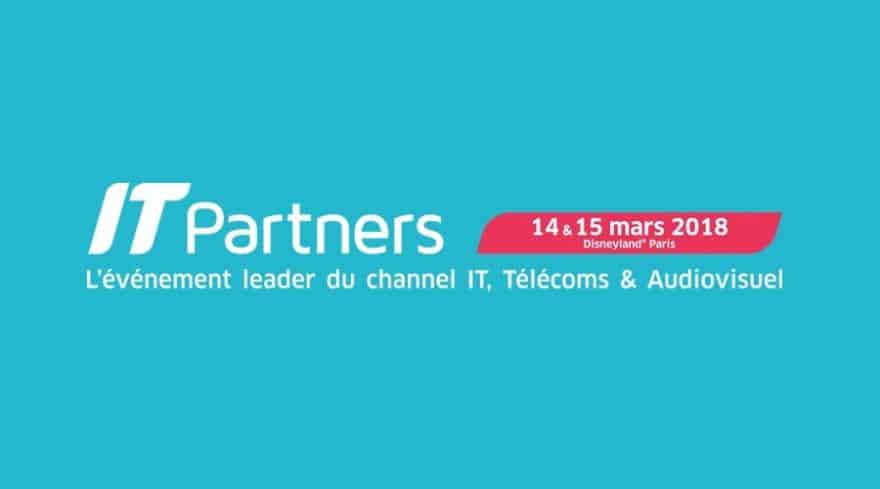 IT Partners is a French trade fair organized annually at the Disneyland Paris in Paris, France. This is a leading event for the French IT channel, telecoms and audiovisual, and includes representatives from global IT markets. It covers a number of areas including infrastructure, software and services, mobile communications and networks and the Internet of Things.

This year on 14th & 15th of March SMSEagle was presented at the fair in the booth of our French Sales Partner NMS Distribution.

Photo of NMS Distribution team with Solarwinds, Flowmon and SMSEagle. 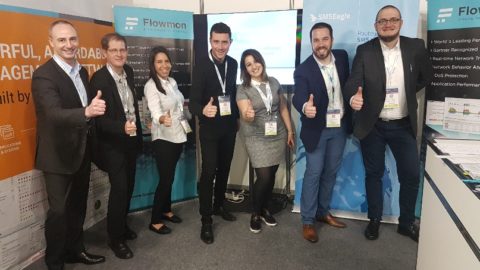 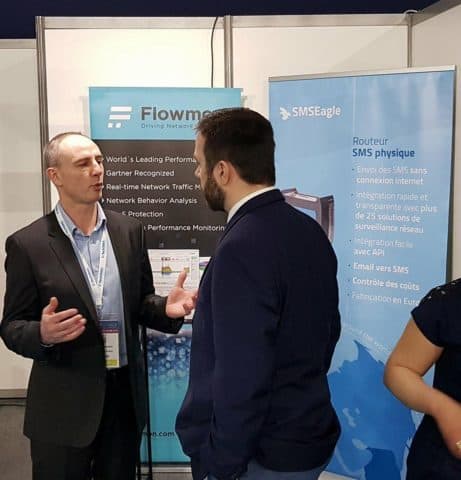 We are happy to announce that SMSEagle NXS-9750 device was awarded the prestigious IT Product award in 2018 of the twelfth edition of the IT Product of the Year contest of ComputerWorld magazine in Czech Republic!

ComputerWorld is a publication website and digital magazine for information technology (IT) and business technology professionals. It is published in many countries around the world under the same or similar names. Each country’s version of ComputerWorld includes original content and is managed independently.

The aim of the competition is to highlight products with characteristics that distinguish them from competing products of the same category. The evaluation emphasizes the positive difference from the competition and the benefits for the customer. This way, both the innovative products and the products with interesting functional improvements, significantly simplified control or, for example, with an exceptionally favorable price can be awarded to the final of the competition.

IT Product of the Year 2018 contest of ComputerWorld

SMSEagle devices can be purchased in the Czech Rep. and Slovakia through our sales partner IT AWACS.

We would like to inform that SMSEagle devices are NOT affected by Spectre and Meltdown security vulnerabilities.

Below is the list of CPUs used in SMSEagle devices:

The above CPUs are NOT vulnerable to Spectre and Meltdown. 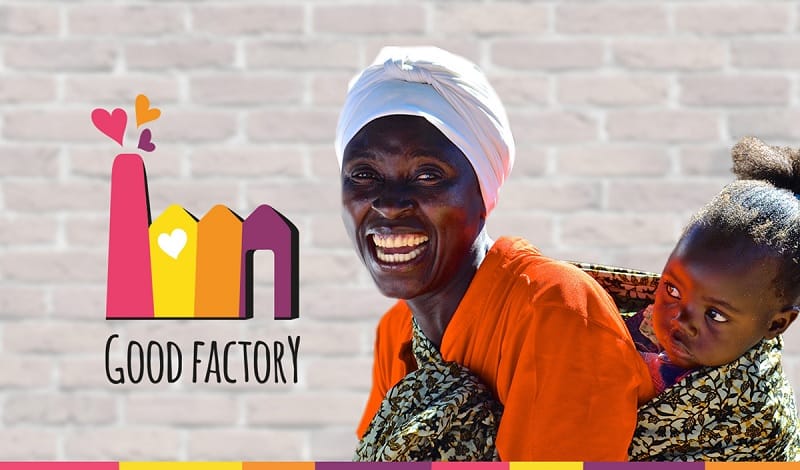 There is a lot of pain in the world today, and at SMSEagle, we believe in giving back in order to help those that may be in less fortunate circumstances.

“Being involved with this type of organization allows me to really live my values and share what I’ve gained throughout the course of my life. The Good Factory Foundation produces goodness in those parts of the world, where evil takes the hope, joy, health and life away from people” Radoslaw Janowski, Product Manager for SMSEagle said.

The Good Factory was founded by Szymon Holownia, a polish journalist who started this second foundation after the Kasisi foundation – he started these organizations because he believes in the unique goodness of people:

“I dared to start the Good Factory, because after I founded the Kasisi Foundation, I started to really believe in people. […] How about, instead of lamenting on how bad this world is, we could change another little bit of it for better?” Szymon Holownia, Founder of The Good Factory said.

They are indeed changing the world for the better – the foundation has already accomplished many feats of social good, many which include the fight against disease and hunger in their countries of focus.

Here’s what they’ve already accomplished, and what we want to be a part of.

The Good Factory Foundation has several objectives, but they all point to a few key themes – the support of human rights, medical assistance, and the proliferation of education, all of which are goals we believe in here at SMSEagle.

The organization has already done countless acts of good in regions of focus. Here are some statistics for 2016:

In 2016 at the Hospital in Democratic Republic of the Congo, the staff provided ambulatory help to 8127 patients, 4354 people were hospitalized. There were 308 surgeries and 151 surgeries, 6476 people were cured of malaria, 722 children were helped to come to the world, including 179 by caesarean section. At the feeding center in Democratic Republic of the Congo 402 children were cured from the acute phase of hunger, 899 from the moderate phase. Every week the place has about 220 children. At Hospice in Rwanda, 25 patients underwent long-term palliative care. 3500 people benefited from the help of a pharmacy in Saoude, north of Togo, where they received the necessary medicines. In Togo, 167 children were paid for school expenses. In the village of Akata Dzokpe in Togo, 30 leprosy patients were provided with medical care, medicines.

As a business that is committed to social good, we look forward to being a part of more acts of kindness like this, and look forward to the positive change they can help bring to parts of the world that need it most.